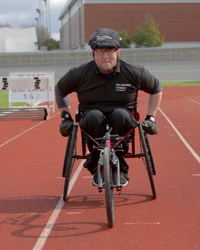 “Someone who has suffered a spinal cord injury faces enormous physical, emotional and financial obstacles. In the years following my injury, the support of the OHHF made all the difference by providing financial assistance to my family and me. Because of our donors’ continued generosity, the Foundation has become a widely recognized source of similar assistance to many others in the region living with spinal cord injuries.”
— Owen Henderson-Howes

On July 12, 1996 Owen Henderson-Howes was paralyzed in a swimming accident at Jones Beach, New York. Owen’s spinal cord injury prompted an immediate outpouring of concern from many of his friends who had come to know him through his involvement in philanthropic and town athletic organizations. In response to the multitude of people who expressed their desire to help, the Owen Henderson-Howes Foundation, a tax-exempt public charity, was formed in 1998.

Owen has been an effective force in youth sports programs as a long-time coach and board member of the Darien Youth Hockey and Lacrosse Associations. Owen has also served as Chairman of the Darien United Way (now The Community Fund of Darien), as well as a board member of Prevent Blindness Connecticut. He is currently a board member of STAR, Inc., and an active participant in Darien Challenger Little League. Because of his outstanding contributions to the community, Owen was honored by being one of the carriers of the 1996 Olympic Torch when it came through Darien.

The financial generosity of OHHF donors is a reflection of Owen’s unstinting personal generosity. The wisdom and benefit of his hard won experience continually guide the OHHF Board and Grants Committee volunteers in the Foundation’s interactions with applicants and grantees. He is the heart and soul of the Foundation.

“Owen’s a great guy….I know how involved he was in the community before his injury, and now, after his injury, he’s doing so much for the people who have suffered spinal cord injuries.” Tim Dunne, friend of Owen and OHHF grantee